How long have you been involved with the UBC Community United Way Campaign?

Richard: I have never been involved in the campaign other than a supporter of the campaign for years, donating money each year. That’s what I have been doing forever and as far as volunteering for anything this is the first for me.

Shaun: I have been involved with the United Way for a while now, but always from behind the scenes. Such as helping with providing event support and needed AV equipment. We have also done some team building activities benefiting the United Way. One of which was participating in a Day of Caring at the Kitsilano Neighborhood House. It was a group of us from various UBC departments, we all participated in maintenance and gardening outdoors.

However, to date, the building of the haunted tour of the old Power House was the most amazing thing! 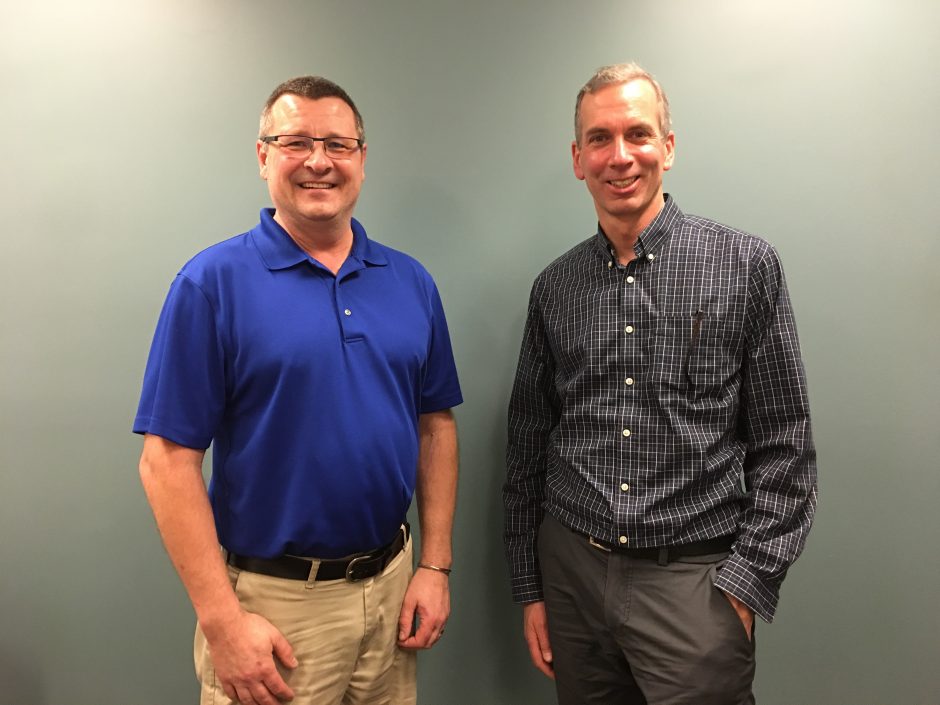 hy do you volunteer for this cause?

Richard: Why? Why not? Well really. Somehow this project (Haunted tour of the old UBC Power House) hit a passion of Shaun’s and mine. Which was perfect and the opportunity to do it for a good cause coincided at the same time so it ticked all the right boxes at the right time.

Shaun: The stars aligned, I guess.

Richard: I am going to be honest. I am one of the silent majority that always intends to but never follows through on these things and it just so happens that a vehicle came my way and an opportunity that fit my passion it just sort of aligned perfectly with UBC’s campaign in donating to a greater cause and it just became a marriage in that respect. If that didn’t happen I would just be a nameless Joe on the street doing my thing just like so many people out there. Maybe it was in me all along and I just needed something to sprout from it, to actually become that person in the time of my life.

I do stuff at home for personal benefit and for the entertainment of the neighborhood and it’s always come across to do it as a fundraiser for a charity. I never knew how to do it. Didn’t know how to bring charity on board, collect for charity, and it’s always been in the back of my mind to do something like that but this opportunity was one of those things where other people could help me along, a whole world of wealth and knowledge from this organization and it just worked. The timing was right, everything fell into place. It was just meant to be.

Shaun: For me, I have always been somewhat behind the scenes with United Way but never directly in the spotlight. We and I say we because it is not just me. It is the whole team at UBC IT AV Services that supports the United Way cause. We try to help as much as we can, donating time to helping the United Way and their fundraising events. This last one. The Haunted Power House just fell into my lap. If it wasn’t for my wife Kelly, her knowing Richard and David and their plans for a United Way event… The first meeting we had on site I knew this was going to be something special. The ideas and passion for this was apparent. As we worked and built on this, I met many incredible people with big hearts that just kept giving and giving. There were probably 30 people (volunteers) involved in this. It was probably the most fun I have ever had with an event at UBC.

Richard: It’s funny that he says that as that sentiment was shared by myself, my managing director and several other people within the organization at a relatively high level. People that are suit and tie wearers by day had unleashed their inner child during this event. It was quite a transformation to see people getting really immersed in it. For example, my director a shirt and tie guy. The minute I saw him in the shadows as I was playing one of my roles I saw him taking on his part and I saw he is actually getting completely immersed in his role and his character! It didn’t become a charity event.  I don’t know what you would call it. It just became a big child’s game we were playing. For anybody that was there it is just one of those events they will remember forever. However after everything was said and done and the doors were closed, we were back in the office wearing the suit and ties just like nothing ever happened.

Shaun: Yeah, it was great. I do not know if it was the spirit of Halloween or we just got to do something that was completely different on campus. It just seemed like I had a chance to meet people that I didn’t know, and even people that I knew fall into roles that were completely out of their day to day professional lives. It was fabulous!

Richard: From the moment of the spark of when it happened, which to be honest I had little faith that it was going to happen, it was just too tight to do but my managing director (David Woodson) was quite the advocate. He was like we can do this and sure enough he got the people together by starting the meetings. We are having our first kick off meeting with t minus 3 weeks to go and even then with Shaun’s and my expertise in this stuff we knew that the timing was tight but we managed to pull it together. It was a lot of work for a lot of evenings but there was not one day that we weren’t laughing and smiling about this whole thing it just kept…….

Richard: Morphing. It evolved into something different all the time

Shaun: The cool part too was there was not one selfish moment from anybody. It was just let’s just do this and have fun!

Richard: It was the definition of a team. We were coaches that had some visions but we wanted people to make it their own. These people had never done this kind of thing before like lighting or other effects and we were just like go with it – experiment yourself!

Shaun: The first evening there were truckloads of stuff coming in.

Richard: He is not kidding. His stuff, my stuff, you could not imagine so much stuff. Load after load of lighting, props, speakers, projectors, you would not believe the stuff that came in.

What is your fondest memory from your involvement with the campaign?

Shaun: I think my fondest memory was all the fun and cool things we experienced. But right before we were to open up everyone was getting their makeup and their costumes on and I was taking pictures, everybody was smiling. Everybody wanted to do this. It was amazing.

Richard: For me it was the transformation of the people there. Approximately 25-30 people volunteered for certain roles and they all asked what do you want me to do? And you just sort of set the scene for them and tell them to find their inner character that they think will fit into this scene and all of a sudden you see this meek and mild office person become some post-apocalyptic, demented character. It is just awesome!  It’s the best thing ever!

What is your goal for next year? What would you like to see happen?

Shaun: The other day David Woodson and I met up at the Powerhouse again to look at a couple of things and he is already scheming for next year. This is what we can do next year, this will be really cool. He also mentioned to me that, to date, this event was the most fun he has had volunteering for a cause at UBC.

Richard: The concept of a haunted house for charity is nothing new. In the city of Vancouver it has kind of died and there has been really nothing of larger scale. There used to be a few that garnered thousands of people over days. There used to be a warehouse under the Oak Street Bridge and I paid my $10 and it was good but we can do it better. Just doing basic math we (UBC & United Way) could potentially raise thousands of dollars by advertising and doing this again next year.